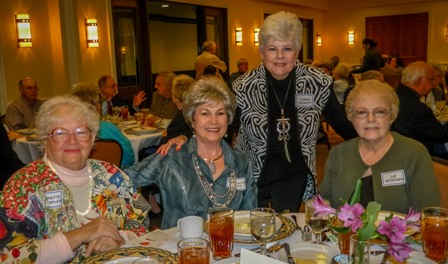 Jeanette Crumpler enjoyed her eight years at ARCO in Dallas, Texas where she was an Executive Receptionist from 1984 to 1999. Jeanette keeps in touch with Charlotte Lloyd, Linda Pickett and others. She was on the 41st floor and at that time there were 54 executives and administrative assistants (total) on 41, 42 and 43. Mr. Glenn Simpson was the President of ARCO Oil & Gas Company and Harry Jamison was the President of ARCO Exploration Company.

Jeanette Crumpler says: “What a great group of people. Charlotte Lloyd was Mr. Simpson's Admin. Asst. at that time and Linda Pickett was Mr. Jameson's. I had come in as a temporary. I had previously worked at Baylor Hospital as an accounts counsellor and then in surgery and even before all of that had been a legal secretary and other jobs then a stint of staying at home for 11 years and becoming an interpreter for the deaf since I had a profoundly deaf son with other health problems. I worked at home and also at various schools in connection with programs for the deaf and handicapped and also at my other son's schools. Years ago I was the first female sports writer at SMU and was pursuing a Journalism degree. I always loved writing and ended up writing 8 books, 150 articles, features and other things and more than 650 interviews”.

Within a week of coming to ARCO, several of those on the executive floors came to Jeanette telling her they wanted to hire her permanently. It was a great time and the job was delightful. Her mother and deaf son were terminally ill and she retired early to take care of them. Jeanette’s other son had passed away in 1979. She says “My years at ARCO were some of the best ever. I found the executives and the administrative assistants as well as many of the other ARCO people with whom I came into contact daily to be some of the kindest and most caring persons I've known. It was a profound experience seeing how they conducted themselves during what were some of the most stressful times for the industry and for ARCO in particular. Again I enjoyed my years there and the opportunity to see examples of courage, compassion and professionalism displayed daily”

Jeanette’s website www.tomatolady.com tells more of her story and if you Google her there are many references also about her being The Tomato Lady as a public speaker for more than 20 years!

Jeanette has also appeared on television and radio, served on the Cultural Affairs Commission of Dallas and has been on the Board of Directors of The Disciples of Trinity (DOT), and counselor, a 501c3 charity serving more than 2700 terminally children, women and men.

Her current book, "Cumberton's Gold" tells stories of those who are different and the royalties go to DOT and she was also recently featured in www.theseniorvoice.com.

Read 2697 times
Tweet
More in this category: « From ARCO to Author: Patrick Shannon Ken Thompson Talks About What Made ARCO So Special: The Exceptional People »